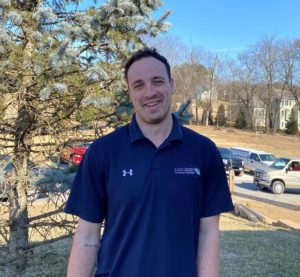 As Assistant Project Manager, Kevin Crawford builds relationships with suppliers and handles the hefty tasks of scheduling, billing, and procurement for Live Green. He rose to this role after spending his summers gaining experience out in the field, and then earning an office internship before attaining his degree. In 2020, Kevin graduated from the University of South Carolina with a Bachelor’s in Finance. At USC, he became an independent thinker and learned the importance of being responsible for oneself.

Kevin prides himself in the final product – a trait he cultivated while growing up in Harford County, and one he has continued to improve upon while with Live Green. As a teenager, when he wasn’t playing on the Fallston High School football team, he found small local landscaping jobs to develop his skills. He continued landscaping for Live Green and playing football intramurally while attending Harford Community College for his Associates Degree. Eventually, he moved onto his adventures at USC. Of course, studying was his top priority, but his most prized memory was seeing the South Carolina Gamecocks make it to the NCAA Final Four. Just months later, Live Green offered him his current position as Assistant PM. When he gets a moment to relax, you’ll find Live Green’s Assistant PM spending his free time mingling with friends or attending sporting events – especially a Ravens, Orioles, or Gamecocks game.